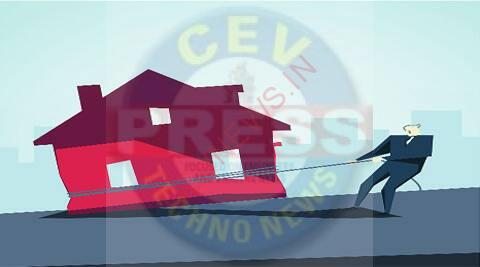 Among the eight cities for which data has been collated, only Hyderabad witnessed a surge in new launches. Bangalore led from the front with the number of new unit launches falling by 76 per cent in Q1 2014.

While the government has targeted housing for all by 2022 and is just one month away from completing a year in office, the dream may not materialise if the trend does not reverse soon.

As the demand for housing remains weak across major cities with the industry suffering from high unsold inventory levels, real estate players, who went slow on launching new projects in 2014, have further slowed the pace.

While the dip in new launches stood at 12 per cent for the year 2014 over that in 2013, the quantum of decline jumped in the first quarter of the current calendar, according to the data provided by Cushman & Wakefield. 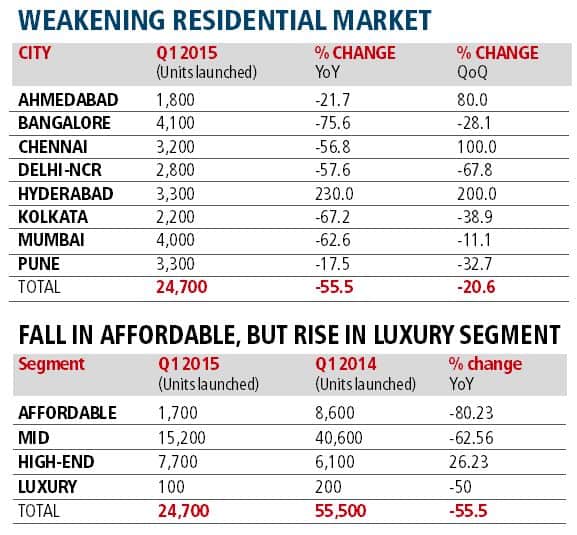 The number of new upcoming residential units dropped 55 per cent in March 2015 over the same period last year, primarily led a decline in demand in cities like Bangalore, Kolkata, Mumbai and Delhi NCR mainly in the affordable and the mid segments. Hyderabad was the only city to have witnessed a jump in new units.

While the affordable and the mid segments witnessed a fall of 80 per cent and 62 per cent, respectively, the high-end residential market registered a 26 per cent rise in new unit launches at 7,700 units in March 2015 from 6,100 units in the quarter ended March 2014.

Cushman & Wakefield said in its report that the decline in new launches has come on the back of less-than-expected sales in the residential sector following which the developers are holding back on new launches and instead focusing on completing their existing projects.

“Cost of creating new projects has been on a steady increase as input costs including cost towards statutory approvals etc from state government, cost of land, land development have been rising and so developers are concentrating to deliver their projects and ensure timely exit for themselves,” said Shveta Jain, ED, residential transaction services, Cushman & Wakefield.

Many developers are in the process of restructuring their debts and financial liabilities and therefore are trying to keep their debt exposure low by cutting on new launches, except in high demand pockets. As the slowdown furthers, experts point out that the government could have pushed the demand by extending tax benefits for new house purchases. But in the absence of any major boost, the pressure continues to prevail.

How the cities fare

Among the eight cities for which data has been collated, only Hyderabad witnessed a surge in new launches. The number of new residential unit launches in the city jumped from 1,000 units in Q1 2014 to 3,300 units in the quarter ended March 2015. This was primarily driven by the formation of a new state of Telangana.

Kolkata was the second in line to witness the decline in number of new units coming up registering 67 per cent fall to 2,200 units from 6,700 units over the same period.

Both Delhi NCR and Mumbai faced subdued demand and in Mumbai the developers also held back their plans on account of expected changes in the proposed development plan 2034.

In Delhi NCR, Noida alone accounted for around 65 per cent of unit launches during the concerned quarter. “Corporates are increasingly looking to set up offices considering that the overall macro-economic situation seems improving. As corporates move in, residential developers expect senior management of firms to shift there, driving the demand for high-end residences over the next few years,” said the report.